This week our community celebrated one of the biggest stories to hit in 2015, the addition of the first Indianapolis-are IKEA store, in Fishers! And for an PR professional, it was a pinch yourself kind of moment! I mean, outside of the fact that Fishers has been home for me since I was in diapers, and is my workplace, it’s IKEA, and their ground breaking (as you’d imagine) did not disappoint.

If you aren’t familiar with Fishers, it’s a suburb north of Indianapolis, and until recently it’s been quite a bedroom community. But as we transitioned into a city of second class in January 2015, momentum has been high. The culmination of booming business, diverse recreation opportunities to enjoy year-round and strong leadership, the landscape of our community has transformed. Alongside the trajectory inside City Hall walls, the community has boomed with growth. Fishers in the 1990’s housed around 9,000 residents, compared to a recent special census that came back with preliminary population totals around the 88,000 mark – I wasn’t lying, Fishers boomed with growth! And enter, IKEA.

IKEA announced their plans to build a store in Fishers last November, and it’s been such an exciting project to watch as a life-long resident and as an employee. So back to the ground breaking ceremony! As we drove up, they had two dump trucks positioned perfectly next to the IKEA sign and the staged shoves for the official turning of the dirt. Off to the right, in a tent described as the Taj Mahal, IKEA set up two displays (pictured below), light refreshments and the perfect spaced area for local media, City Council, Mayor Fadness and Councilwoman Susan Brooks. Along with that, they had chairs perfectly placed for the guests to relax, each complete with a 2017 catalog. IKEA officials spoke along with Congresswoman Brooks and Mayor Fadness before everyone was invited out for the formal turning of the dirt. It was electric! The energy of the audience, the tone of the speeches and the media coverage all suited the occasion perfectly. Stay tuned for details on their grand opening. Word to the wise, start saving your money now! 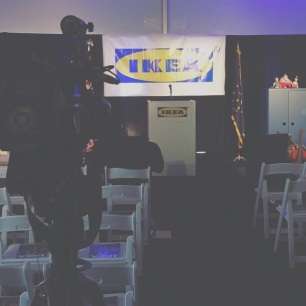 One thought on “Welcome to Fishers, IKEA!”

Important reminder for public relations professionals and digital strategists! 📣 Social media is a tool to speak with audiences, not at audiences. ‼️ #prtips
Choosing to focus on these beauties instead of that fact Einstein sneaked his way onto a table and finished my Starbucks. 🤦🏼‍♀️ #worstdog
And if you don’t know, now you know. 💁🏼‍♀️ #prtips
Diggin these build-a-pair earrings! 🤩 #bookedandbusy
Hard but important truths. 💯 Working in public relations sometimes means trying, revising, and trying again. Even still, not every pitch will materialize into media coverage. 🥺
I guess if vacation has to end at least I’m going home with you. 🤍 #happyplace